It’s a fact that if you read one Agatha Christie novel or short story a week, it would take you almost two years to finish. By that time you could start it all over again because you’ve forgotten all you’d read! I’m pretty sure, though, that it would take even more time to watch every movie adaptation of Christie’s works! What’s so good about Agatha Christie that filmmakers can’t stop shooting newer and newer adaptations? And what’re the differences between the novel “The Mirror Crack’d from Side to Side” and its two adaptations I’ve watched? That’s what I’m going to search answers for!

It is possible that the success of Christie adaptations lies in the fact that you can watch them with others. When you’re reading a Christie mystery all by yourself, you’re most of the time completely clueless as to who did it – and why is a question that is totally impossible to answer. However, when you’re watching a film with companions it’s great to guess together! We used to do so with my cousins – before Miss Marple’s or Poirot’s revelation at the end we used to pause the film and everybody had to guess who the murderer was. Now I usually read the books before I watch the movies in order to compare the two, but I greatly miss those times! Maybe I should give up with my new habit!

Of course I would never dream to say that adaptations are better than the books themselves. Agatha Christie hated all the adaptations that were released during her life, including the Margaret Rutherford series and she was never satisfied with the size of Poirot’s moustache on film! A year before Christie died a new chapter began in the history of her adaptations – starting with “Murder on the Orient Express” in 1974, a series of Hollywood all-star adaptations kicked off.

However, the two series that pay tribute to Christie the best possible way and try to put everything on film as she would have liked to are both British – one of them is Joan Hickson’s Miss Marple series made by BBC in the 1980s, the other one is the Poirot series with David Suchet in the lead role. After the success of Poirot, ITV started another Marple series with Geraldine McEwan and later on with Julia McKenzie as Miss Marple. In this one the novels were often rewritten to fit the episodes.

“The Mirror Crack’d from Side to Side” was written by Agatha Christie in 1962 and is one of her later novels. Miss Marple’s character is older and feebler than she was and it is emphasized how everything has changed in St. Mary Mead – introducing a new housing estate to the village. Despite the passing of time, Agatha Christie is still on top of her creativity – the story might not be as strong as her best ones, but the characters are lovely, the crime is exciting and it has the Christie touch that makes her novels such a great pleasure to read.

The two film adaptations I watched after reading the novel were the all-star “The Mirror Crack’d’"made in 1980 and the 4th episode of Marple’s 5th season with Julia McKenzie. I think both adaptations stuck to the story quite faithfully.

Anyone who takes a look at the cast of the 1980 movie wants to watch it then and there. Elizabeth Taylor, Rock Hudson, Tony Curtis, Kim Novak, Geraldine Chaplin: even minor characters are played by world famous stars. But the film just didn’t feel right for me. It was somehow made into a parody of itself, without any grace or style. Some really stupid and highly unfunny jokes were repeated over and over. And Angela Lansbury didn’t do well either – her Miss Marple was nothing like the pink and fluffy old lady Agatha Christie wrote about.

The 2010 adaptation for ITV’s series was just as good as the other episodes – nothing too special, but everything that is needed: including a great Miss Marple, the marvelous English village feeling (which was also missing from the other one) and a special atmosphere that the series always creates. I have no idea why the storyline of the brand new housing estate and the funny character of Miss Marple’s annoying nurse wasn’t included in any of the films, but that might be just a reasonable thing not to include everything.

I wouldn’t like to spoil the book or any of the films, as they’re certainly worth a watch, so I decided to evaluate the characters by giving points to those I liked better in the adaptations. As there’s a great number of characters you’re free to guess who the murderer was and why, and then you should check out whether you were right or wrong! Let’s get started! You can see screencaps from the film version in the left and from the series in the right. 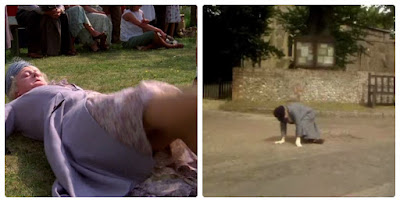 I love Julia McKenzie, so I think I’m a bit biased here, but Angela Lansbury was anything but good. Her Miss Marple took an unnecessary slapstick fall right at the beginning, but at least they made it clear what we should expect. Miss Marple’s character is a win for the series. The score is 0-1. 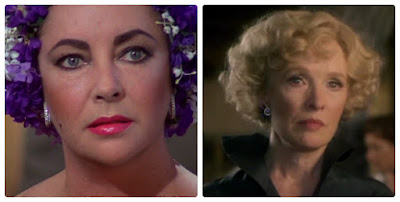 Marina Gregg was played by Elizabeth Taylor and Lindsay Duncan. Except for her awful hairdo, Taylor was amazing, she was much more dominant and temperamental than Duncan (even though she did a fine job, too), but still she was not too much. As it was her last true leading role, I’ll give her this point – the score is 1-1. 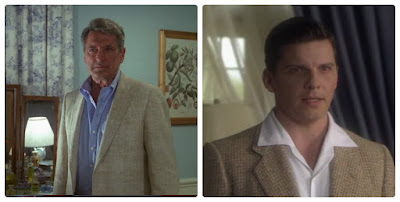 The upcoming character is Rock Hudson vs. Nigel Harman as Jason Rudd, Marina’s loving husband. I think there was no reference whatsoever in the book that Marina’s husband was years younger than her, so first I didn’t appreciate that change, but as I come to think of it, it was not so very bad after all. Rock Hudson was a bit frozen, but at least had the right age, so give him the point – the score is 2-1. 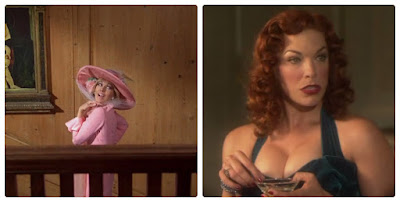 Lola Brewster was played by Kim Novak and also by Hanna Waddingham. I’m sorry to say that but Kim Novak was way too much for me – I know it was her role, but her eternal fight with Marina was not funny at all and soon became tiring. She was also too stupid and it didn’t come off well – the other Lola was just fine, a bit silly but good-looking, so she’s the winner here. The score is 2-2. 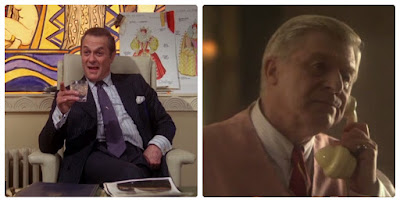 Called Ardwyck Fenn in the book, Martin Fenn in the 1980 film and Vincent Hogg in the series, this character didn’t do much originally. Tony Curtis’s role as a producer was not something I would have agreed to do in his place – he had nothing to do except for telling some sharp jokes on filmmaking. Martin Jarvis’s cynical journalist was much better, and the character came to life in a better way than in the book. My point goes there! The score is 2-3. 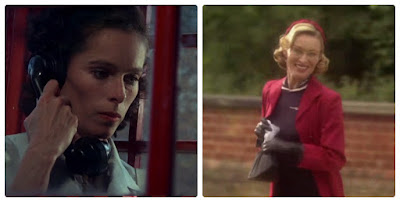 Ella Zielinsky (for some reason called Ella Blunt in both films) was a great character both times – played by Geraldine Chaplin and Victoria Smurfit just as well. This is a hard choice, as both actresses caught the plain personality of the secretary, but I’ll choose Geraldine, so the score is 3-3. 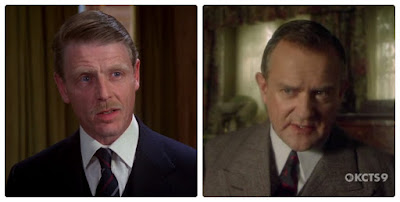 Inspector Craddock is a recurring character in the Marple novels and a very dear friend to Miss Marple. Edward Fox’s character became her nephew in the film and was a bit stupid, while Hugh Bonneville played Inspector Hewitt instead of Craddock and he was quite a strange man, something of a war veteran, but I couldn’t figure out why this aspect was included… Well, it was still better than the bad cliché of a stupid policeman, so I’ll give him my point – making the score 3-4. 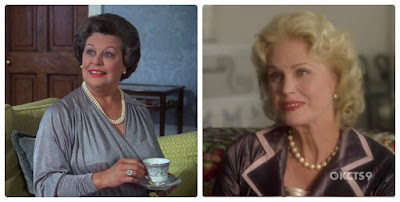 Dolly Bantry is another friend of Miss Marple, who also appears in more novels, and she’s a very kind woman, but Joanna Lumley’s character in the series annoyed me so much that she won’t get my point, that’s for sure! So the winner is Margaret Courtenay, even though she didn't do much. The score becomes 4-4. 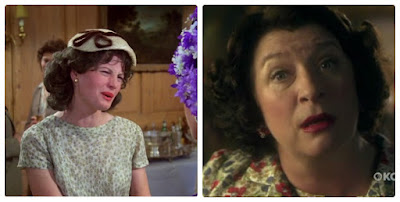 Heather Badcock is the victim of the story, as Miss Marple says in the film: "She was a bit of a bore, but you don’t kill someone for that – if you did, there’d be no one left in the village" This time I was horribly annoyed by Maureen Bennett, as you can see it in the left, just the way she spoke would have made anybody kill her! Besides, she was way too young, and Caroline Quentin was a hundred times better, so she gets my point here. The score is 4-5. 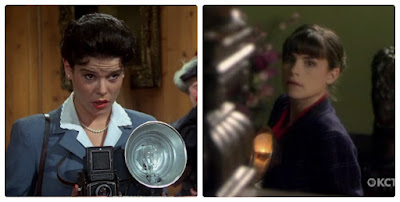 Margot Bence was played by Marella Oppenheim and Charlotte Riley, but here it’s impossible to access the film version, as this quite important character was basically neglected, so the score is 4-6, which makes the final score.

All in all, both adaptations had some good and bad points, but I think the series had fewer bad ones than the film. Still, I think the wonderful cast makes it worth giving the movie a try and without having read the book it might be more enjoyable! But if you’re a true Agatha Christie fan, I wouldn’t recommend it – you’ll be disappointed!

This is my contribution to "Beyond the Cover" blogathon, hosted by Speakseasy and NowVoyaging. Check out the entries of the first day here!

BLOGATHONS I'M GOING TO PARTICIPATE IN: 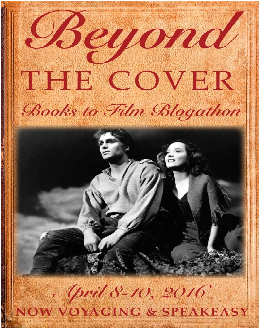 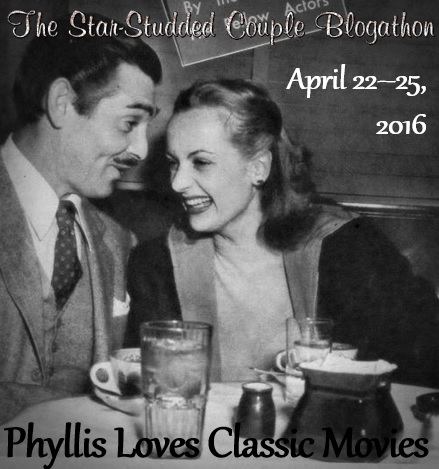